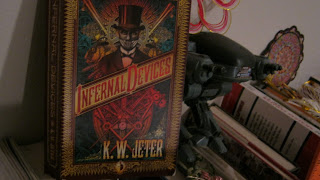 by K.W. Jeter
With an introduction by the author, and an afterword by Jeff VanderMeer
Originally published 1987 by St. Martin's Press
Republished 2011 by Angry Robot Books
Review by William D. Tucker.


Infernal Devices is a ripsnorting, grandly comical Victorian-era potboiler that is far more entertaining than the most recent Indiana Jones movie; indeed it is more exciting than any big budget Hollywood blockbuster that I have seen in the past five years. It is that rare book that is both literary and cinematic. You can't help but pine for a movie version even as you realize that it could never be as good as the book. It's full of crazy, clockwork automatons, cliffhanger chapter endings, sinister conspiracies, and gloriously impossible super-science. It is a book which will transport you to another reality. By book's end, I was satisfied, and yet felt it a crime that there was just the one book. Surely, this would be a series worth following.


Infernal Devices is also a seminal text in the so-called steampunk movement in speculative fiction and pop culture. According to the author's introduction, and the afterword by Jeff VanderMeer, Jeter coined the word steampunk as a riff on cyberpunk, which was the sub-genre of note in 1980s science fiction. Jeter was poking fun at the tendency to put any old random word and the the word punk together to mint a new stylistic category. Jeter was on to something. Cyberpunk is still kicking, and we also have steampunk, which is getting a lot of play these days, and let's not forget biopunk, cypherpunk, and even cthulhupunk.


What is steampunk? It's a kind of fetishism of old technologies, especially anything that's made of rivets, gears, steel, and is powered by steam. Do a google image search of steampunk, you'll pick up on it. Trains, flying devices that use huge flapping artificial wings made of wood, metal and canvas, clockwork automatons  and clockwork cyborg prostheses, and various forms of Victorian-inspired fashions, sometimes with kinky, anime-inspired adjustments for a more sexually liberated age of cosplay and Lady Gaga. In the author's forward, Jeter speculates that the vogue for steampunk fashion and apparatus comes from a desire to escape the bland plastic smoothness of computers, cell phones, and other electronic amusements that have become none too amusing these days. Jeter likes his machines as machines. All the better to distinguish them from an increasingly machine-like humanity, now beavering away in cubicle cultures the world over . . .


Some other notable steampunk works include William Gibson and Bruce Sterling's alternate history epic The Difference Engine, K.W. Jeter's own Morlock Night, which is apparently a sequel to H.G. Wells's The Time Machine, and the criminally underrated anime feature film Steamboy, which was created by Katsuhiro Otomo, the mastermind behind the manga and film of Akira. Steamboy in particular is a good place to start if you want to get a handle on some of the more fanciful possibilities of steam-based retro-technology and alternate history. In Otomo's world,  a genius inventor finds a way to make steam power the atomic power of its age. Massive weapons of war are developed, and the nationalistic world powers all want in on the action. But the genius inventor has no interest in the machinations of warlike governments, and so he tries to fend off the schemes and dreams of spies and arms manufacturers.


Gibson and Sterling's The Difference Engine constructs a reality where Charles Babbage's analytical engine was brought to fruition in 1824 and brings on an early onset of accelerated technological progress including ubiquitous personal computing and a worldwide communications network very much like our own internet. Gibson and Sterling's book embodies that aspect of steampunk which seeks to pose alternate possibilities of technological progress: just because we don't do it with punch cards and steam engines doesn't mean we can't make it happen that way. It may seem whimsical on the surface, but it raises some fascinating possibilities, and also forces us to confront the all important issue of who controls the means of production when it comes to technological advance and why that matters. It's not arbitrary, and it could change any day.


But you don't need prior interest in or knowledge about steampunk to enjoy Infernal Devices. It begins with an uptight young man who is in a bit of rut . . .


George Dower has inherited his deceased father's clock repair shop in Victorian London. Dower doesn't have the mechanical touch, though, and so he struggles with the various clockwork gimcracks that his father's former clients bring to him with the expectation that mechanical genius is hereditary. Dower doesn't have the genius, but he's a tenacious worker, and he's aided by his father's loyal servant, Creff. Creff shows Dower the basics, and by sweat and struggle Dower becomes a good enough clock repairman. Now and again, someone will bring in something truly bizarre, some contraption of gears with chains as fine as silk threads which is beyond Dower's prowess. The son has to send these people away, openly confessing his lack of skill.

One evening, a strange man, whom the excitable and somewhat racist Creff immediately accuses of being a thief of Ethiopian heritage, brings Dower a strange box which contains a totally incomprehensible clockwork regulator device of some sort. The mystery man comes to be known as the Brown Leather Man due to what Dower perceives as his dark, ritually scarred skin. The Brown Leather Man exhorts Dower to figure out what the device is for, and Dower, despite his lack of confidence, promises to find out the device's purpose within the week.

The Brown Leather Man leaves Dower a strange coin as security before he exits. It depicts a weird face, part man, part amphibian in appearance.

There are other people who want to know what the regulator is good for, people who are willing to lie, to steal, and possibly even to do murder to obtain the device and put it to some sinister use.

The action of the book concerns Dower's efforts initially to hold onto the regulator and to solve the mystery of the man-fish coin. At first, it would seem that Dower doesn't need to stray too far from his shop to pursue adventure. Thieves and schemers are all too happy to come barreling through his door or window. Among the memorable rogues Dower must deal with are the duo of Scape and Miss McThane, who seem, by their crude patterns of speech and extensive use of slang, to be Americans. The two are engaged with exhibiting clockwork amusements at inflated prices to small-town audiences, and they have a keen interest in getting their hands on the regulator.

Scape and McThane are two of the delights of Jeter's novel. Scape is a burly, swaggering bullshit artist who affects hipster shades with blue lenses and thinks he's got the world by the balls. Miss McThane is a comical strumpet, her every impulse designed to offend and unsettle Dower's ridiculously uptight Victorian sense of propriety. Jeter brilliantly puts anachronistic American slang and profanity into Scape and Miss McThane's dialogue which alternately bruises and confuses Dower's fussy gentlemanly decorum. One gag involves Dower hearing Scape mutter something under his breath that he thinks is a portmanteau of the words "cogs" and "succor." Perhaps an obscure religious entreaty? Miss McThane, who has a liberated sense of sexuality, sees the uptight Dower as a challenge and constantly tries to seduce the Englishman. Personally, my favorite scenes in the book involve the goofy dynamics of Scape, Miss McThane, and hapless Dower.

Another source of humor is Dower's hidebound nature. There are many times in the first person narrative where the reader will find themselves two steps ahead of Dower in deducing what exactly is happening. You want to shout and wave at the guy, try to steer him on to the right track. But even so, the book still plays its cards close to the vest, and it will keep you guessing as to the overall design of what's happening and why.

It would be a crime to give away any more of the story, but suffice it to say that nothing is as it first appears. Jeter is not afraid to go right over the top in terms of the underlying logic of his make believe world.It is not realism, but I found it weirdly convincing. I wanted very much to believe in the reality of this make-believe world.

Also, after you read the book, run this theoretical through your analytical engine: what would it have been like if it had all been told from the perspective of the Brown Leather Man . . .
Posted by William D. Tucker at 9:49 AM